For most people, the term “photographic lighting equipment” tends to conjure up visions of complicated setups involving light stands, sand bags, electrical cables, etc. And while lighting can get quite involved, it doesn’t always have to be. In fact, it can be downright simple and easy to use.

This lesson demonstrates some basic outdoor portrait lighting techniques that can bring the quality of your photography up to the next level.

Setting up for the Shot

In scouting a location for this portrait session, I decided upon a local public park, which had a lot of different background options. We started with a mown path that ran through a grove of tall oak trees. My assistant, James, and I, planned to meet Rohan, a friend of mine who agreed to model, at the park. James and I got there a little early so that we could prepare for the shot. Once I determined the general frame of the shot, I had James stand in for Rohan to see how the lighting would look. 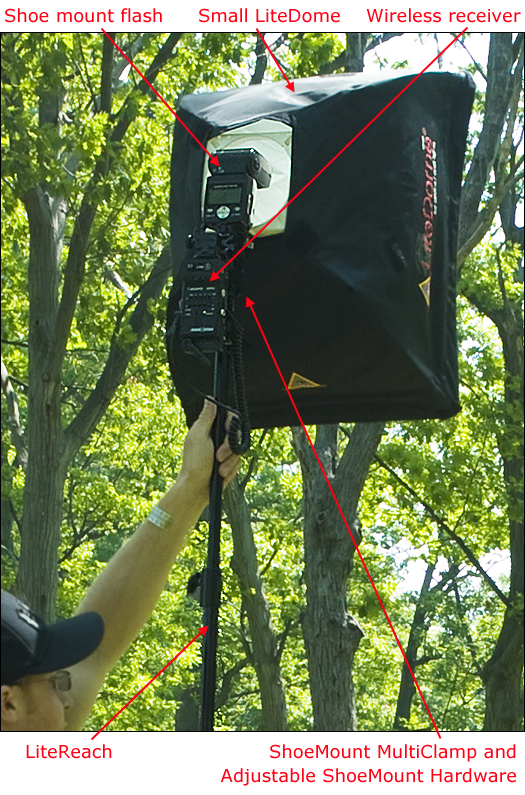 Since I was using a telephoto lens to keep the optical distortion low, as well as to throw the background out of focus, I had to position myself about 50 feet from where Rohan would be standing. Once the light was set up, I had James walk out to the spot and test the wireless connection. As you can see, it synced up nicely.

Look and Feel of the Shot

Shortly afterward, Rohan showed up with a few changes of clothes. My original concept for the shot was to have Rohan strolling through the park in a business suit, as though he’d just gotten out of a long day at the office and was now enjoying the fresh air and relaxing to the sounds of the breeze and birds. But once we were at the location, the elements of the shot just took on a somewhat different feel. And so rather than try to keep with the original concept, I decided to just be flexible and go with what looked good through the frame.

I told Rohan (who is not a model, but a schoolteacher and children’s book author/illustrator) the general idea and asked him to give me a few poses that felt natural to him. James then walked him to the spot we had picked out earlier, and before we started shooting, we all agreed that it might look better if he took his jacket off and draped it over his shoulder.

Once he was in position, I took a few shots without the LiteDome setup to get a sense of what the shot would look like, and also where I should have James position the light. Here’s one from that series.

As you can see from the result, the exposure levels on the foreground and background were good and there was a nice rim light from the sun outlining Rohan against the background. However, the light on the front of Rohan was much too dark, and it was clear that the LiteDome setup would be needed to help balance out the lighting levels.

Filling in the Shadows

Since the sun was positioned behind Rohan, camera right, I asked James to stand with the LiteDome/LiteReach setup on camera left and angle the light downward somewhat to counter-balance the light from the sun. 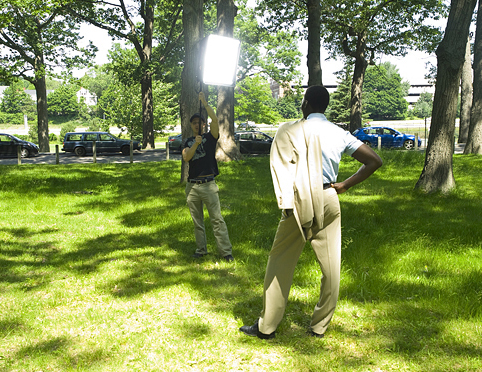 Even from these setup shots, where the flash was going off, you can see how much this light helped to illuminate the shadow areas.

Once James was in position, I took a series of shots. Here’s one of our favorites.

Notice how well the soft light transmitted from the LiteDome helped to illuminate Rohan’s front side. And the LiteReach helped James to keep this light higher than he normally could have held it. Below, you can see a side-by-side comparison of the shot with and without the LiteDome used. 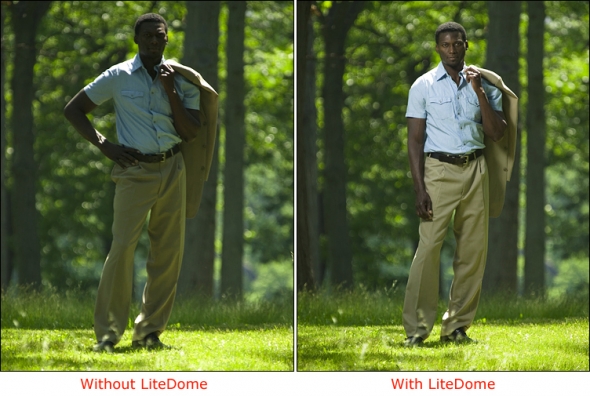 Before moving on to the next shot, I decided to come in tight for a headshot. As you can see, the LiteDome really helps to accentuate the natural light of the sun and adds a nice catchlight in the eyes.

Not too far from the grove of oak trees was a newly renovated wading pool, and we thought it might be fun to have Rohan pose standing in the water. 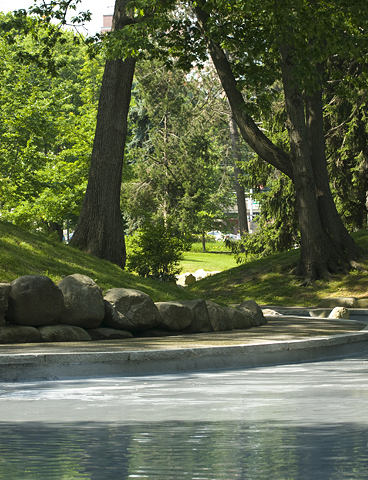 After a quick wardrobe change, Rohan rolled up the bottoms of his jeans and waded out into the pool. Once again, I took a few exposures of the scene without the LiteDome to see where we stood with the lighting.

Next, I asked James to join in the pool-wading fun, and he happily obliged, since it was pretty warm that day — around 80°. I thought it would be best if we all moved away from the middle of the pool where all the kids were playing in order to attain a less-busy background. Before shooting, we once again tested out the wireless sync between the camera and the flash.

The LiteReach really came in handy here. Working in water can be really hazardous if you need to worry about live power cords, and most people want to keep their LiteStands dry as well. The LiteReach, when paired with an off-camera flash, meant James could move with the shot without having to worry about anything except where to stand. 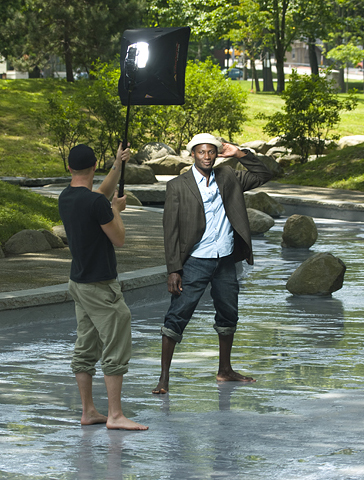 Once I had a composition I liked, I asked Rohan to give me a series of poses and then took a series of shots. This ended up being one of our favorites.

Below, you can see a side-by-side comparison of the three different exposure approaches. 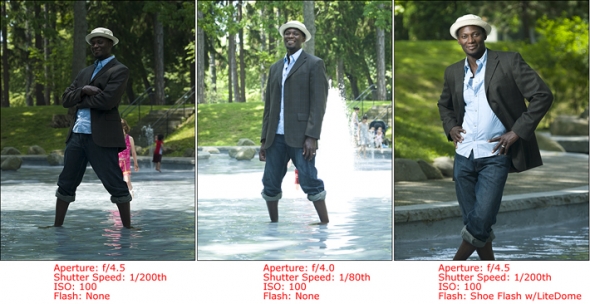 Before we left, Rohan asked if I might take some shots for his daughter, Ruby, of him drinking from one of the water fountains. I thought it was a great idea and decided to get a little more creative with the lighting.

Rather than front-light him as we had before, I thought it would be better to rim-light him and the stream of water for a more graphic effect. Rim lighting, also known as “backlighting”, where the subject is lit from behind, is a great technique for shooting a profile portrait. I ended up capturing a bunch of great water-drinking shots, but this one ended up being one of our favorites. 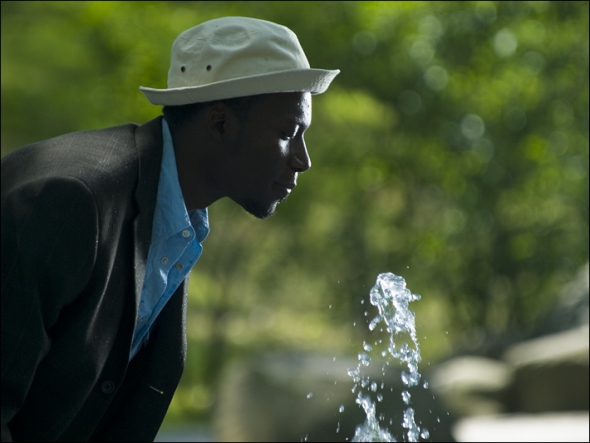 James also really liked the look of this shot and asked if I could take some shots of him doing the same thing. So he handed the LiteDome setup to Rohan, they switched spots, and I took a few more exposures. As you can see, James was a little more eager to cool off!

After cooling off, we all headed back to the cars, unencumbered by a lot of equipment, enjoying the fresh air and sound of the birds. It’s days like this that we’ll remember in the cold winter months to come.

When you look at the resulting images of this lesson, particularly the comparison shots, you can see how adding a little extra diffused light can really help to transform the quality of your outdoor portraits. Remember to experiment with your lighting and camera techniques, and above all, have fun in the process!